What’s on in the Petersphere

Discover and enjoy events around Petersfield and the villages

We promote local events on our website, via social media and in the P pod. If you organise events in and around Petersfield we will help you get them in the guide.

It’s free for charitable, non-commercial and voluntary organisations. Just contact the team to get your event in the guide. 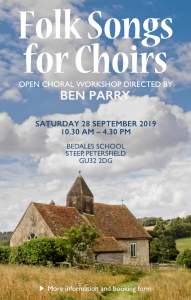 Ben Parry is one of the leading figures in the field of British choral music, as a conductor, composer, arranger, singer and producer in both classical and light music. He toured the world as musical director and singer with the Swingle Singers, and co-directs the professional choir London Voices, heard on the soundtracks of major films such as The Hobbit, Hunger Games and Harry Potter and the Deathly Hallows.

A former Director of Choral Music at the Royal Scottish Academy of Music and Drama, he is currently Assistant Director of Music at King’s College, Cambridge, where he directs the mixed choir, King’s Voices. He is Artistic Director and Principal Conductor of the National Youth Choirs of Great Britain and a director of the Eton Choral Courses. He has made over eighty CD recordings and his music has been broadcast from the BBC Proms and ‘Carols from King’s’. His compositions and arrangements are published by Oxford University Press, Peters Edition and Faber Music.

We are looking forward to an inspiring day exploring and celebrating Britain’s rich tradition of folk songs. Repertoire will be drawn from John Rutter’s Folk Songs for Choirs vol. 1, together with settings by Ben Parry and sea shanties arranged by Alan Drake, conductor of Rogate Choral Society.